Hossam Habib (Arabic: حسام حبيب), born 31 May 1980, is an Egyptian singer. Hossam has only one sister who is younger than him. He grew up with passion for singing and football. Hossam loved to sing and compose but he never attempted to make singing his career. His family and friends convinced him to give it a try and he signed with a production company where he did his first single 'Men Yomak'. Hossam launced his first album with another production company called FAME and his second one with Melody. 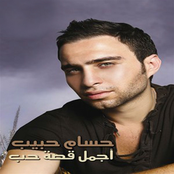