Henry Thomas (1874-1930) was an American country blues singer, songster and musician. Born in Big Sandy, Texas, he enjoyed a brief recording career in the late 1920s which has latterly been influential. He was often billed as "Ragtime Texas". His style was an early example of what later became known as Texas blues guitar. Thomas was born into a family of freed slaves in Big Sandy, Texas in 1874. He began traveling the Texas railroad lines as a hobo after leaving home in his teens. 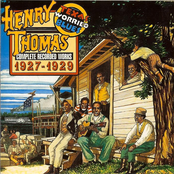