Hasna is a talented Moroccan singer who appeared suddenly on the musical scene and in no time made it to the top with a number of superb songs. Her claim to fame was her remake of Marsoul El Hob, composed by the Moroccan musician Abdel Wahab el-Doukali. el-Doukali himself was astonished at the amount of success Hasna brought to a song he thought was now old and forgotten. Hasna began her pan-Arab musical career with her 2001 album, Hasna 2001, which was released under the Alam El Phan label did not meet with great success. 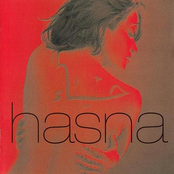