Hanna-McEuen is a country music duo made up of Jamie Hanna and Jonathon McEuen, sons of the founding members of the Nitty Gritty Dirt Band and, since their fathers married twin sisters, first cousins. They released their self-titled and critically acclaimed debut album in 2005. Their two big hits " Something Like A Broken Heart" & "Tell Me" hit #56 on the US Country charts in 2005. 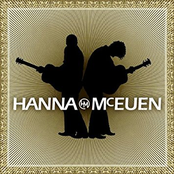