Greg Bates, born and raised in Nashville, Tennessee, currently attends Bellmont University. According to the Did It For The Girl Songfacts, his debut single, "Did It For The Girl" was released on April 16, 2012, the same month that Bates made his Grand Ole Opry debut. 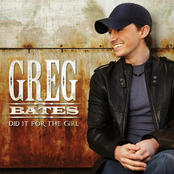 Did It For The Girl