Grandpa Elliott Small, born Elliot Small in 1945, is a street-musician in New Orleans, Louisiana. He plays the harmonica, sings, and is a street icon in New Orleans. He has been featured on Playing for Change in several episodes. His debut song with Playing for Change was "Stand by Me". He has also been on The Tonight Show and The Colbert Report. He has been a street icon on Royal Street in the French Quarter and Jackson Square in New Orleans since moving from New York City back to his place of birth in the 60's. 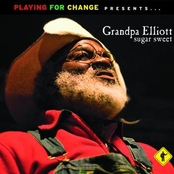