There are two musicians by the name of Gary Smith. 1. Gary Smith, the harmonica player. For three decades, San Jose-based harmonica player Gary Smith has been an influential figure in the San Francisco Bay Area blues scene. His band was the first to grace the stage at the inaugural S.F. Blues Festival way back in 1973. Long regarded as the Godfather of San Jose Blues Harmonica, he really demonstrates his harp playing prowess and Little Walter influenced tone on Blues For Mr. B. 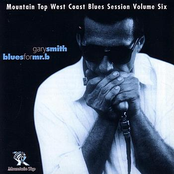 Blues for Mr. B