Artist Info: Four To The Bar

Four to the Bar was an Irish band in New York City during the early- to mid-1990s. From its beginnings as one more hard-drinking pub band from the boroughs, it ventured into a neotraditional fusion of pop, rock, and Irish and American folk. Band History The Early Days: 1991-1992 Four to the Bar was formed in the working-class/immigrant Irish community of Woodside, NY, in 1991. The initial lineup was Martin Kelleher (from Cork) on bass guitar, David Yeates (from Dunboyne, Co.

Top Albums Four to the Bar 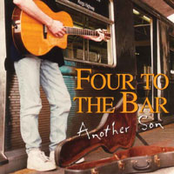 Craic On The Road: Live At Sam Maguire's

Four to the Bar