Fingertight was a California based band that disbanded several years ago. While they were together they produced only one album, "In the Name of Progress." It displayed an uncommon range of sound--the sound could be loosely decribed as alternative but from track to track style blurred. Here it was more punk, there was a metal piece and off to the side and to the left acoustic instrumentals and borderline emo. The one thing that was consistent 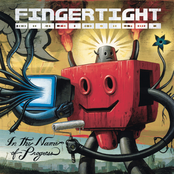 In The Name Of Progress