Due West is an American country music group composed of Matt Lopez, Tim Gates and Brad Hull. Due West was founded in Nashville, Tennessee in 2004, and was almost signed to a contract with RCA Records Nashville in 2006, but lost the deal due to the merger of Sony Music and BMG. By 2009, the band self-released its debut single "I Get That All the Time," which was also made into a music video, which has aired on Great American Country. In 2011 their second single 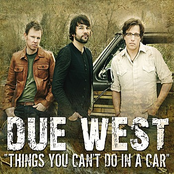 Things You Can't Do In A Car