Douwe Bob Posthuma (born 12 December 1992), professionally known by only his first names Douwe Bob, is a Dutch singer-songwriter. He won the Dutch talent show De beste singer-songwriter van Nederland. He specializes in folk and country music and he has released four albums. He represented the Netherlands in the Eurovision Song Contest 2016. Early life Douwe Bob Posthuma was born on 12 December 1992 in Amsterdam in the Netherlands. He was born into a Frisian family. 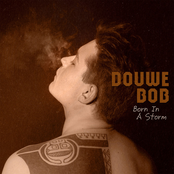 Born In A Storm