Amala Zandile Dlamini, known professionally as Doja Cat, is an American rapper, singer, songwriter, and producer. She also is Jewish and South African. Based in Los Angeles, she signed a recording contract with RCA Records in late 2013, later releasing her debut extended play," Purrr!" the following year. Doja rose to prominence in 2018 with her single "Mooo!", which became a viral success on YouTube. As of now, she has already collaborated with artists such as Gucci Mane, Rico Nasty, Tove Lo, and Ari Lennox. 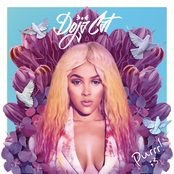