There are at least two artists known as Dizraeli: 1) A Brighton hip-hop poet Dizraeli is a hip-hop artist with roots in Brighton and Bristol in the United Kingdom. He is part of the group Mud Sun with fellow MC Baba Brinkman and the electronica/hip-hop group Bad Science as well as releasing his own solo records. His debut album was released in october 2009 and it's called Engurland (City Shanties). You can purchase it through http://www.dizraeli.com. 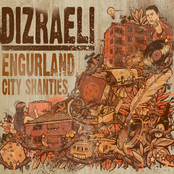 Dizraeli and the Small Gods