Diana Karazon (Arabic: ديانا كرزون) (Born October 30, 1983 in Kuwait and raised and lived in Amman, Jordan) is a Jordanian singer who rose to popularity around the world after winning the first season of Super Star by Future Television. Ever since she was very young, her family, and especially her father, a guitarist and member of the Artists' Syndicate, encouraged her to sing. She sang Um Kulthum's songs before chanting lyrics and children songs during festivals, in addition to giving other performances on stage. 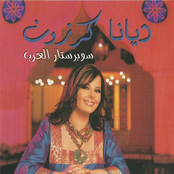