Derek Ryan is an Irish singer. He was born in County Carlow and is a Country and Irish singer, and previously a pop singer as part of Irish boy band D-Side (2001-2006). From the age of twelve, Derek Ryan had musical aspirations performing regularly at social events with his brother Adrian as the Ryan Brothers. Having grown up in Garyhill near Carlow town, Derek was bred into loving Irish traditional music by his family. Derek took part in fleadh ceoils and became a winner of two all-Ireland titles in both bodhrán and ceili drumming. 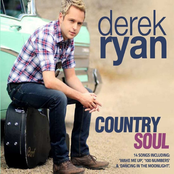