Charles David Houston (born December 9, 1938 in Bossier City, Louisiana; died November 30, 1993 in Bossier City) was an American Grammy award winning country music singer. His peak in popularity came between the mid-1960s through the early 1970s. David Houston died of a brain aneurysm on November 30, 1993, less than two weeks before his 55th birthday. In 1963, David Houston rose to national stardom with the single "Mountain of Love"; the song, which was different from the tune made famous by composer Harold Dorman 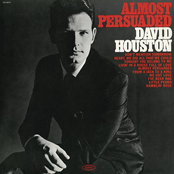