Craig Finn, an American singer, songwriter and guitarist, is the man behind Lifter Puller, The Brokerdealer and The Hold Steady. He was also featured on Rhymesayers rapper P.O.S.'s Safety In Speed (Heavy Metal). He released his first solo album, Clear Heart Full Eyes, on January of 2012. Here is some background information on Clear Heart Full Eyes from the No Future Songfacts . In early 2011 Hold Steady frontman Craig Finn challenged himself to write a new song every day in his Brooklyn apartment for his first solo album. 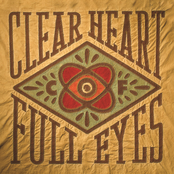