Clotaire K is a hip hop artist of Lebanese descent who has toured and released records since 1995. His style is a blend of traditional Middle-Eastern music and hip hop, while the lyrics are in English, French, and Arabic. He is part of a 5 piece band that has been touring for 13 years. His achievements include a BBC award as well as an EMMA Music Award nomination. 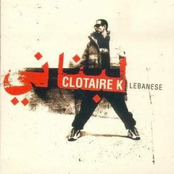