Chamberlin is the biggest band from Vermont that no one there has ever really heard of. As their debut album Bitter Blood (Roll Call/EMI) drops, the eight-month-old act finds themselves criss-crossing the country in the midst of national tours, having played but a handful of shows in their home state. Last fall, before finishing Bitter Blood, the only people Chamberlin had performed for were close friends and flames during late night whiskey-fueled rehearsals at their mountainside cabin in Goshen, VT (pop. 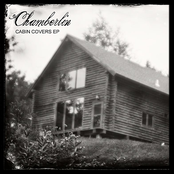