Carmen Rasmusen (born March 25, 1985 in Edmonton, Alberta) is a Canadian-American singer and was a singing hopeful who ranked sixth on the second season of American Idol in 2003. Rasmusen was praised by her fans as having a wholesome, girlish appeal and for refusing to wear outfits she and her mother deemed "immodest" on stage. Her critics, however, were more vocal. In her performances, Rasmusen often had trouble controlling her natural vibrato. Judge Randy Jackson was often one of her harshest detractors. 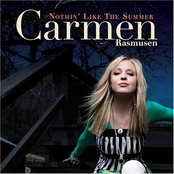