Carl Smith (March 15, 1927 – January 16, 2010) was a country music singer and guitarist. Known as "Mister Country", Smith was the former husband of June Carter Cash and drinking buddy of Johnny Cash. Carl and June are the parents of singer Carlene Carter. After his divorce from June, he married country singer Goldie Hill. He retired from performing in 1979. He had many famous hits including, "Kisses Don't Lie", "Are You Teasing Me", "Hey Joe", and many others. 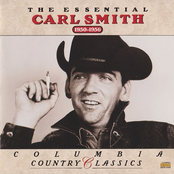