Bessie Jones (February 8, 1902 - July 17, 1984) was an American gospel singer from Smithville, GA. She learned her songs from her grandfather, a former slave born in Africa. She was a founding member of the Georgia Sea Island Singers. Alan Lomax first encountered Bessie Jones on a southern trip in 1959, Jones made her way up to New York City two years later and asked Lomax to record both her music and biography. Jones told an interviewer in Alachua 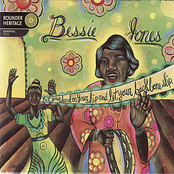 Put Your Hand on Your Hip and Let Your Backbone Slip