Beatrice Annika Miller (born February 7, 1999) better known simply as Bea Miller is an American singer-songwriter and actress. She makes passionate, electronic-inflected pop music and is best known for competing on the second season of The X Factor. A native of Maplewood, New Jersey, Miller began performing at a young age and by her teens had garnered voice acting credits in such films as Ice Age 3 and Toy Story 3. In 2012, Miller auditioned for and 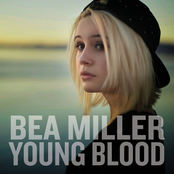