There are 2 bands with the name Band Aid. (1) Band Aid was a British and Irish charity supergroup, founded in 1984 by Bob Geldof and Midge Ure to raise money for famine relief in Ethiopia by releasing the record "Do They Know It's Christmas?. It was Christmas #1 that year, surpassing all expectations. Artists featured in the recording included: George Michael, Boy George, Bono, Phil Collins, Spandau Ballet, Duran Duran, Paul Young, Bananarama, Paul Weller 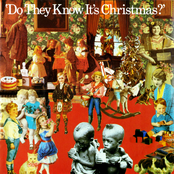 Do They Know It's Christmas?