Founded in 1994 and directed by Edward J. Hines, ANATOLIA is a group of musicians dedicated to the preservation of folk, classical and dance music traditions of the Middle East. The musicians of ANATOLIA strive to bring a new understanding of Middle Eastern cultures to Western audiences, while celebrating music and dance traditions its members have known since childhood. Anatolia is a western Massachusetts-based group of talented musicians whose 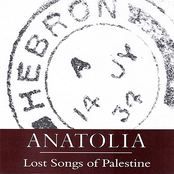 The Music of Islam Vol 8

The Music of Islam Vol 12