The initial lineup of American Princes began in Brooklyn in early 2002, with David Slade (vocals, guitar), Matt Quin (drums), and John Beachboard (vocals, bass). By the end of the year, the band had left New York, relocating to Little Rock, AR. The southern city's cheap rent and central location made it an ideal base for musicians who wanted to tour nonstop - which they did, picking up guitar player and vocalist Collins Kilgore along the way. The next two years were spent writing and releasing 2 albums (We Are the People and Little Spaces) 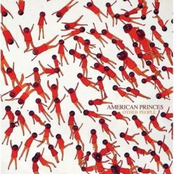