Amal Hijazi (Arabic:أمل حجازى) (born on 20 February 1977 in Beirut, Lebanon) is a Lebanese singer, model and pop icon. She is currently one of the most active Lebanese singers and has given a number of concerts throughout the world and has made countless TV appearances. After her lengthy career as a fashion model, Hijazi released her first single was called "Halan" ("Right Away") in 2000, it was followed by her second single "Rayyah Balak" ("Put Your Mind at Ease") one year later, for which she also shot a music video. 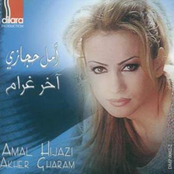