Alterkicks were formed through adverts in shops in Merseyside and Cheshire. Though based in Liverpool, the band are drawn from far and wide. Ditching successful careers in programming, teaching and being on the dole, Alterkicks began to focus on their music and getting themselves in front of people in 2003. Ever impressed by the songwriting and shape-shifting of bands like Love, Radiohead, Bowie and the Kinks, they have rapidly managed to create a set that is winning friends and praise across the UK. 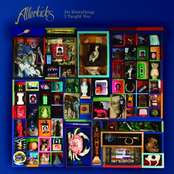 Do Everything I Taught You

Cheeky Cheeky and The Nosebleeds