From the streets of Boston, New York, and Philadelphia, AHMIR is the premiere, up and coming male R&B group. "They're Next" is the fitting title Billboard Magazine labeled this R&B foursome. Coming onto the scene in 2006, their first single "Welcome To My Party" peaked at #82 on the Billboard Hot R&B / Hip Hop Songs chart and became the #19 Top Selling R&B Hip Hop Single of 2006. Also in 2006, AHMIR won the annual "We Hear The Future" Competition 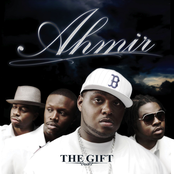