By now, Age Of Daze has been described as the one of the most promising up and coming rock bands from the East Coast. Their first single "Afflicted" broke Top 20 on the Canadian Rock Charts which doesn't happen for independent bands, that soon changed when they caught the attention of Fontana/Universal and inked a deal which made their album Hollywood Ending available in stores Nationally across Canada. Line up: Tim Morrison - Vocals/Guitar Matt McLaughlin - Bass 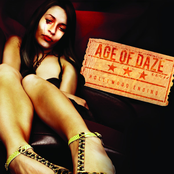