3 of Hearts was an American country music trio composed of Blaire Stroud, Katie McNeill, and Deserea Wasdin, all natives of Fort Worth, Texas. Signed to RCA Records in 2001, the trio released its debut album in July of that year. Two of its singles entered the U.S. Billboard Hot Country Singles & Tracks charts, as did their rendition of "The Christmas Shoes". Blaire Stroud, Katie McNeill and Desera Wasdin first sang at a funeral; later, they cut a demo tape which was eventually sent to RCA Records, who signed the trio to a record deal in 2001. 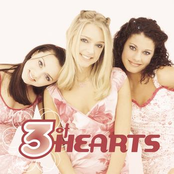