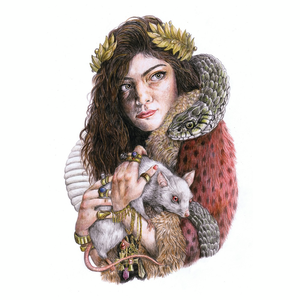 The Love Club EP is the debut extended play (EP) by New Zealand recording artist Lorde. At the age of 12, Lorde was spotted by Universal Music Group A&R Scott MacLachlan and began to write songs by herself. In December 2011, MacLachlan paired Lorde with producer Joel Little and within three weeks, Lorde and Little co-wrote and produced all of the songs for the record. In November 2012, it was freely available through SoundCloud, and from 8 March 2013, the EP was purchased for sales by Universal Music Group and Virgin. An indie rock-influenced electronica album, The Love Club EP revolves around Lorde's fear of becoming a new artist. The record received general acclaim from music critics, who praised its overall production and compared its musical style to works by Sky Ferreira, Florence & the Machine and Lana Del Rey. The release peaked at number two in New Zealand and Australia. In the US, the record charted at number 23 on the Billboard 200 chart and has sold 60,000 copies. To promote The Love Club EP, Lorde performed during various concerts and released "Royals" as the only single from the EP. User-contributed text is available under the Creative Commons By-SA License; additional terms may apply.