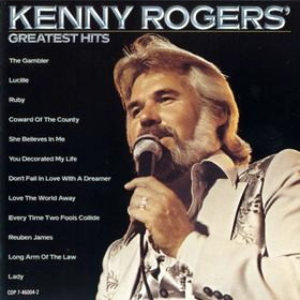 He might be a little harder to recognize as he now has had the disaster Hollywood Treatment... The album reached #1 on both the Pop and Country charts in the US and featured three singles that were not included on any of Rogers’ studio albums – these being “Lady” (written and produced specifically for Rogers by Lionel Richie, which was a #1 hit single in the same year), “Love The World Away” (a top five country and top 20 pop hit that was featured on the soundtrack of the box-office smash Urban Cowboy) and “Long Arm of the Law” (a lesser known, but still relatively popular song among Rogers’ loyal fan base). The album features a further nine hit singles from Rogers’ career, hence missing out on a number of others (notable omissions including “Daytime Friends”, “Sweet Music Man” and “Love or Something Like It”) but didn’t stop the album from being a huge success and confirmed Rogers’ status as one of the world’s biggest stars, going on to sell more than 22 million copies worldwide. In country music today it remains the best selling compilation release of all-time, beating out Garth Brooks‘ 1994 limited-time-availability release The Hits. In the UK the album was sold with the same artwork under the title Lady but differed slightly in the track listing, omitting “Ruby Don’t Take Your Love To Town” and “Reuben James” in favor of “Goodbye Marie” and “Sail Away“. As it happens, this is not the only Kenny Rogers album to be called Greatest Hits. In 1971, while with The First Edition, an album under that title was released. Since 1980 many other collections by Rogers have been called Greatest Hits, such as a 1985 Readers Digest box set and the 1988 collection of his RCA material. However, this 1980 collection on Liberty was the first solo offering by Rogers to be given this designation. In 1983, when Rogers changed labels to RCA Records, Liberty quickly issued 20 Greatest Hits, a more complete overall look at Rogers’ hit list. However, both albums remained in catalog side by side for over two decades. Also in 1983, HBO re-released the Greatest Hits package on special picture discs. The track listing remained identical to the 1980 US release. Track Listing: 1. “The Gambler” 2. “Lady” 3. ”Don’t Fall in Love with a Dreamer” 4. ”Ruby, Don’t Take Your Love to Town” 5. “She Believes in Me” 6. ”Coward of the County” 7. “Lucille” 8. ”You Decorated My Life” 9. ”Reuben James” 10. ”Love the World Away” 11. “Every Time Two Fools Collide” 12. ”Long Arm of the Law” User-contributed text is available under the Creative Commons By-SA License; additional terms may apply.