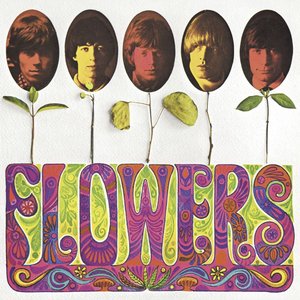 Flowers is the eighth U.S. studio album by The Rolling Stones, released in 1967. The album is a mishmash of previously recorded tracks. The songs either appeared as singles, had been omitted from the American versions of Aftermath and Between the Buttons, were collected from studio sessions dating back several years, or are simply reissues of songs recently released on other albums. Three tracks had never been released. "My Girl" from the Out of Our Heads and Between the Buttons sessions, and "Ride On, Baby" and "Sittin' On A Fence" from the Aftermath sessions. The title refers to the album's cover, with flower stems underneath the portrait of each band member. Bassist Bill Wyman claims that Mick Jagger and Keith Richards deliberately arranged the stem of Brian Jones's flower so that it had no leaves, as a prank. He later stated that "I didn't get the joke". The portraits are from the UK version of Aftermath. Flowers reached #3 in the US during the late summer of 1967 and went gold. In August 2002 it was remastered and reissued on CD and SACD digipak by ABKCO Records. User-contributed text is available under the Creative Commons By-SA License; additional terms may apply.