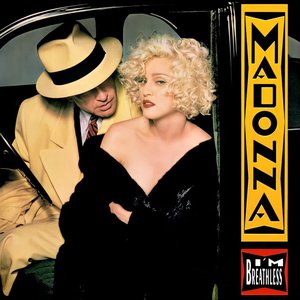 I'm Breathless: Music from and Inspired by the Film Dick Tracy is the second soundtrack album by American singer and songwriter Madonna. It was released on May 22, 1990, by Sire Records to promote and accompany the film Dick Tracy. In the film Madonna starred as Breathless Mahoney and her then-boyfriend Warren Beatty played the title role. After filming was complete, Madonna began work on the film's soundtrack, with songwriter Stephen Sondheim, producer Patrick Leonard and engineer Bill Bottrell. She also worked with producer Shep Pettibone on the album's first single, "Vogue". The album was recorded in three weeks, at Johnny Yuma Recording and Ocean Way Studios, in California. Musically, I'm Breathless consists predominantly of jazz, swing and pop songs. The tracks reflected Madonna's showgirl personality and were influenced by her relationship with Beatty. The singer wanted to create music that would fit the style and production of the film, set in the days of the Untouchables law enforcement, and sang the songs accordingly. In some areas she pitched her vocals and belted the notes when necessary. She even smoked cigarettes in order to portray the vocals of her character Breathless. Beatty and singer Mandy Patinkin were featured as duet partners on three of the songs User-contributed text is available under the Creative Commons By-SA License; additional terms may apply.