Album: Take It To The Limit 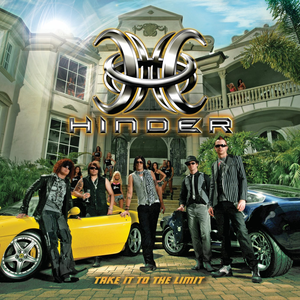 Take It to the Limit is the second studio album of rock band Hinder. The album has been in the works since January 2008 and was released November 4, 2008. The album was recorded by Jay Van Poederooyen and produced by Brian Howes at Van Howes Studios in Vancouver, BC, Canada. The record was mixed by Chris Lord-Alge at Mix LA in Tarzana, California, USA. It has a much heavier glam metal influence than their last album, while retaining the elements of hard rock and post-grunge the band had previously used. The album has been certified Gold by the RIAA US. The first single "Use Me" was released on radio July 7, 2008, with a digital download release on July 15, 2008. "Heaven Sent" was performed at Hinder concerts dating back to 2007, however the song was originally called "Heaven Lost You" when it was first performed. The second single, "Without You" was shipped to pop radio on September 23, 2008. The single "Use Me" is also the band's first song available as DLC (Downloadable Content) for the music games Rock Band 2 and Guitar Hero World Tour, and was released on November 4, 2008 and December 23, 2008, respectively. Hinder was featured on Xbox Live's "Artist of the Month" in November and allowed Gold Members to download a 480p version of the "Use Me" music video for free. "Up All Night" was released as the third single in January 2009. Loaded and Alone, which explores the dark side of fame, is the fourth single, being released to rock radio July 2009. Critical reactions to the album have been mostly negative. It received a 49/100 score on Metacritic. Christian Hoard of Rolling Stone gave a brief review regarding frontman Austin Winkler as "a bad representative for emotional frat dudes." In a worse review, Allmusic's Stephen Thomas Erlewine gives the album a 1.5/5 rating and describes the band as "eager embrace of every dumb sleaze-rock clichĂ© to emanate from the Sunset Strip in 1988." He also notes how, in demonstrating Hinder's "stultifying lack of imagination," most of the tracks borrow their names from other well-known songs. Entertainment Weekly gave a less harsh grade of C+ but echoed many of the same sentiments regarding their lack of originality and contrasting song styles of hard rock and ballads. Chris Willman explained, "If you were ever young and in love, dumb with drink, and had a head swimming with not just Boone's Farm wine but also Def Leppard, Bon Jovi, and AC/DC (to name these guys' most blatant anthemic influences), you may be willing to forgive Hinder's lack of originality and preponderance of madonna/whore issues." He summed up by saying "If only the whiplash they induce resulted from real headbanging, not from trying to follow Hinder's song-to-song indecision about whether to be studs or wimps." Many have criticized the originality of the album, saying many of the lyrical themes were similar to many snap music rap albums (especially the Dem Franchize Boyz album On Top Of Our Game), and the sound sounded similar to many 1980's glam metal bands. User-contributed text is available under the Creative Commons By-SA License; additional terms may apply.