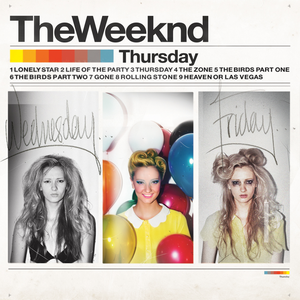 Thursday is the second Mixtape of the Canadian artist The Weeknd, released online for free on August 18th 2011, It features more of the hazy drug and sex-fueled R&B that filled The Weeknd's debut album, House of Balloons. Tracks like Gone and Life Of The Party highlight his purely hedonistic, yet fairly tragic lifestyle. Producer Illangelo returns for most of the tracks, and expands and finds new sounds from those on House of Balloons. It features one of the only two guests of the entire trilogy; Drake on The Zone. User-contributed text is available under the Creative Commons By-SA License; additional terms may apply.