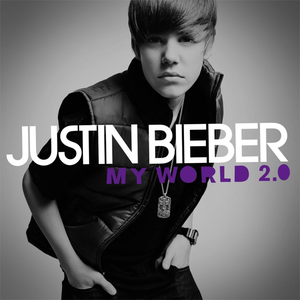 My World 2.0 is the debut studio album by Canadian singer-songwriter Justin Bieber. It was released on March 19, 2010, by Island Records. It is considered the second half of a two-piece project, being supplemented by his debut extended play My World (2009). After signing a recording contract in light of his growing popularity on YouTube, Bieber worked with collaborators including his mentor Usher, in addition to producers Tricky Stewart, The-Dream, and Midi Mafia. The record follows in the vein of My World, incorporating pop and R&B styles, and also experiments with hip hop elements. Lyrically, it discusses teen romance and coming of age situations. Upon its release, My World 2.0 received generally favorable reviews from music critics, who complimented its production. It debuted at number one on the US Billboard 200 with first-week sales of 283,000 copies. In doing so, Bieber became the youngest solo male artist to top the chart since Stevie Wonder in 1963. With My World peaking at number five that week, he became the first artist to occupy two top-five positions since Nelly in 2004. When the album sold more copies in its second week, it became the first album since The Beatles' 1 to debut at number one, and sell more the following week. Bieber also had his second consecutive number one album in Canada, and in its second week the album peaked at number one in Ireland, Australia, and New Zealand. It also charted in the top ten of fifteen other countries. Bieber supported the album with his very first headlining tour, the My World Tour. The album was preceded by the lead single, "Baby", featuring Ludacris, which was released on January 18, 2010, and two digital singles, "Never Let You Go" on March 2, 2010, and "U Smile" on March 16, 2010. "Somebody to Love" impacted radio as the album's second single on April 20, 2010, and "U Smile" impacted radio as the album's third single on August 24, 2010. The album received a Grammy Award nomination for Best Pop Vocal Album at the 2011 ceremony. User-contributed text is available under the Creative Commons By-SA License; additional terms may apply.