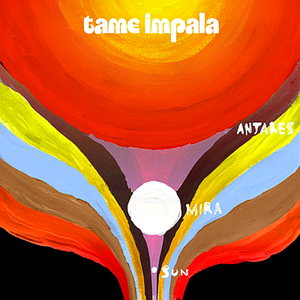 Tame Impala is the second EP by Australian psychedelic rock band Tame Impala. It reached number 1 on the Australian Independent Record Labels (AIR) Chart and number 10 on the ARIA Physical Singles Chart. Three singles were released from the EP: "Desire Be, Desire Go", "Half Full Glass of Wine" and "Skeleton Tiger". All three received national radio airplay on the Triple J network. "Half Full Glass of Wine" reached number 75 on the Triple J Hottest 100. The song is also featured on the Hottest 100 compilation CD/DVD. Due to Kevin Parker's original artwork there was some confusion with the EP title and many believed it to be called Antares Mira Sun. The artwork is an interpretation of a slide he saw in an astronomy lecture, which demonstrated the difference in size between the stars Antares, Mira and the Sun. User-contributed text is available under the Creative Commons By-SA License; additional terms may apply.