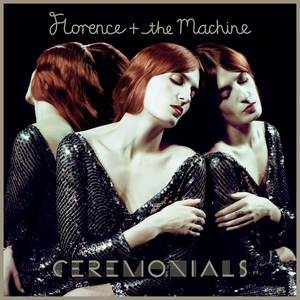 Ceremonials is the second studio album by English indie rock band Florence and the Machine. It was released on 28 October 2011 by Island Records. The band started working on the album in 2010 and finished it in 2011. The standard edition of the album was entirely produced by Paul Epworth, who also worked prominently on the band's debut album Lungs (2009). Ceremonials received generally positive reviews from music critics, who drew comparisons to artists such as Kate Bush, while also praising the instrumentation, Florence Welch's vocals and the production of the songs. It appeared on several year-end critics' lists in late 2011. At the 55th Annual Grammy Awards, the album received a nomination for Best Pop Vocal Album, while "Shake It Out" was nominated for Best Pop Duo/Group Performance. Ceremonials debuted at number one on the UK Albums Chart, becoming the band's second consecutive number-one album. It also debuted at number one in Australia, Ireland and New Zealand, and peaked at number six on the US Billboard 200, becoming the band's first top-10 album in the United States. It has sold 2 million copies worldwide. Five singles were released from Ceremonials. "What the Water Gave Me" was released on 23 August 2011 as a teaser for the album. "Shake It Out" was released on 30 September 2011 as the album's official lead single, becoming one of the band's most commercially successful singles to date. "No Light, No Light" was released on 16 January 2012 as the second single from the album, and "Never Let Me Go" was released on 30 March 2012. "Spectrum (Say My Name)" was released on 5 July 2012, and fuelled by a remix by Scottish DJ Calvin Harris, became Florence and the Machine's first number-one single in the UK. The album's fifth and final single, "Lover to Lover", was released on 30 November 2012. Ceremonials was also promoted by the band by a worldwide tour, the Ceremonials Tour (2011â€“12). User-contributed text is available under the Creative Commons By-SA License; additional terms may apply.