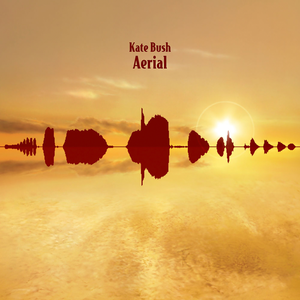 AerialĀ is the eighth album by the English singer-songwriter and musicianĀ Kate Bush, released asĀ double albumĀ in 2005, twelve years after her 1993 albumĀ The Red Shoes. The second disc, subtitledĀ A Sky of Honey, consists of a single piece of music revelling in the experience of outdoor adventures on a single summer day, beginning in the morning and ending twenty-four hours later with the next sunrise. AerialĀ is Bush's first double album, and was released after a twelve-year absence from the music industry during which Bush devoted her time to family and the raising of her son, Bertie. The anticipation leading up to the album's release was immense, with press articles devoted to Bush being printed months, even years before.Ā Like Bush's previous album,Ā The Red Shoes,Ā AerialĀ does not feature a cover photograph of Bush, but rather one that is emblematic of the album's celebration of sky, sea, and birdsong. The cover image, which seems to show a mountain range at sunset reflected on the sea is in fact aĀ waveformĀ of aĀ blackbirdĀ song superimposed over a glowing photograph. User-contributed text is available under the Creative Commons By-SA License; additional terms may apply.