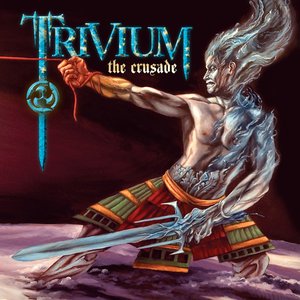 The Crusade is the third album by heavy metal band Trivium. Released on October 10, 2006 through Roadrunner Records. It is considered a drastic change from their previous album Ascendancy by some critics. The album was produced by Jason Suecof and mixed by Colin Richardson. In the United Kingdom, the album was released on October 9, and was certified silver in for sales in excess of 60,000 copies. The album peaked at number 7 in the UK and at number 25 on Billboard 200 and it sold over 100,000 copies in the United States. The album represents a drastic change in style from their previous album, Ascendancy, adopting a mostly thrash metal sound, and having metalcore characteristics such as breakdowns and growled vocals featured in metalcore are kept to a very small minimum. As a result, vocalist Matt Heafy used a clean vocal style similar to James Hetfield throughout most of the record. Heafy justified this by noting that "the four of us were never into bands that scream and we don't like any of the current bands that scream, so we asked ourselves why we're doing it." However, growled vocals would return as a regular attribute on the band's next album, Shogun, as well as sometimes some breakdowns. Lyrical themes on the album include famous killings. "Entrance of the Conflagration" is about Andrea Yates's murder of her five children, "Unrepentant" is about Nazir Ahmad's murder of his three daughters and stepdaughter, "Contempt Breeds Contamination" is about the death of Amadou Diallo, and "And Sadness Will Sear" is based upon the murder of Matthew Shepard. Another common theme on this album is unity or "being united" with songs like "Anthem (We Are the Fire)" and "The Rising". Another lyrical theme that is noticed is in the song "Becoming the Dragon," which is based on the Japanese mythology story of a fish (or known as Koi in the song) climbing to Dragon Gate and transforms into a dragon and becomes kings over the nation. User-contributed text is available under the Creative Commons By-SA License; additional terms may apply.