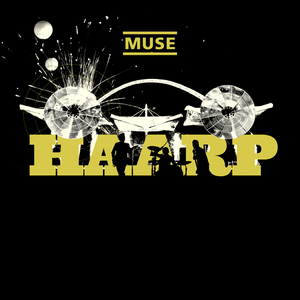 HAARP is a live album and video by English alternative rock band Muse, released on 17 March 2008 in the United Kingdom and April 1, 2008 in the United States. The CD documents the band's performance at London's Wembley Stadium on 16 June 2007, while the DVD contains 20 tracks from the performance on 17 June. The total number of audiences watching the band's shows on the 16th and 17 June 2007 was 180,000 (150,000 seated and 30,000 standing). In the build-up to the release of the recordings, the band released a number of web-format clips from the DVD. The full performance of "Unintended" was added to the band's official website on Christmas Eve, 24 December 2007, dubbed as a "little taste of things to come". On 11 January 2008, a microsite at www.he-3.mu was announced, featuring a grid of six boxes representing thumbnails of short clips from the DVD. As of 17 March, all six clips have been filled, featuring short clips from "Knights of Cydonia", "Supermassive Black Hole", "Feeling Good", "New Born", "Blackout" and the outro riffs of "Stockholm Syndrome". "Feeling Good" was also released in full to radio and television stations shortly afterwards, although it was not advertised on the official website. Vue cinemas held special screenings of the concert in high definition on 11 March 2008 at selected cinemas. A special edition of HAARP was released in addition to the regular CD/DVD, which features additional backstage footage and bonus postcards showing pictures of the three band members. The HAARP microsite is available for visitors to download iPod- and iPod Touch-/iPhone-formatted videos and mp3s of "Knights of Cydonia", "Supermassive Black Hole", "Unintended" and "Plug In Baby" featured on the DVD for free. Included is a bonus video of "Micro Cuts" and an mp3 of "Soldier's Poem" from the performance on the 16 June. User-contributed text is available under the Creative Commons By-SA License; additional terms may apply.