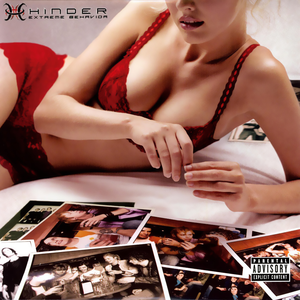 Extreme Behavior is the debut album of rock band Hinder. It was released in 2005 to almost universally negative reviews, before going platinum in September 2006. All songs were co-written by Brian Howes. Shoulda was co-written with Brian Howes and Social Code. The song Running in the Rain did not make the cut for the album but has been played at concerts on their North American tour. The cover art is nearly identical to the cover art of the book How to Tell a Naked Man What to Do: Sex Advice from a Woman Who Knows, by Candida Royalle, except, on the book, the model's lingerie is black. One of the cover pictures has been altered and the pictures in front of the model have been altered to include the members of Hinder, the alternative album cover has been used in conservative markets like the Philippines and the Middle East. The woman on the front cover of the original is not actress Katherine Heigl, contrary to speculation. User-contributed text is available under the Creative Commons By-SA License; additional terms may apply.