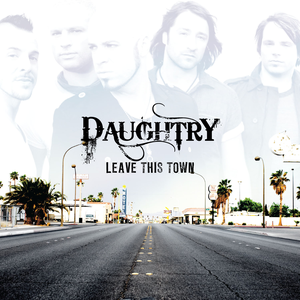 Leave This Town is the second studio album recorded by American rock band Daughtry, released through RCA Records and 19 Entertainment on July 14, 2009. It is the first album that they recorded as a band, as their self-titled debut album was recorded before the band was formed and only lead singer Chris Daughtry was signed to the label; it was also their last album to feature Joey Barnes on drums. The album's style is primarily arena rock, with influences ranging from hard rock to pop rock. Three singles were released from the album, led by "No Surprise", which became the group's fourth chart topper on the Billboard Adult Pop Songs chart in August 2009. All three peaked within the top 40 on the Billboard Hot 100 and within the top 5 on both Adult Pop and Adult Contemporary. The album was released to generally mixed reviews, with critics noting the lack of progression from their previous album. It fared better commercially, debuting atop the Billboard 200 and selling over 1.3 Million copies in the US alone. Leave This Town has been certified Platinum by both the RIAA and Music Canada. User-contributed text is available under the Creative Commons By-SA License; additional terms may apply.