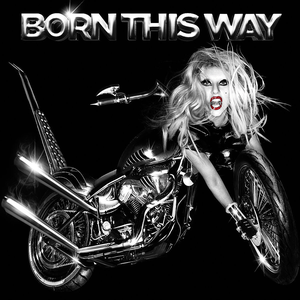 Born This Way is the second studio album by American singer-songwriter Lady Gaga, released on May 23, 2011 by Interscope Records. The album is a follow-up to her internationally-successful debut album The Fame (2008) and her biggest EP release The Fame Monster (2009). As co-producer of every track on the album, Gaga collaborated with numerous producers, including RedOne and Fernando Garibay, with whom she had previously worked, and newcomers such as DJ Snake, DJ White Shadow, Jeppe Laursen, Robert John “Mutt” Lange and Clinton Sparks. She also included artists like E Street Band saxophonist Clarence Clemons and Queen guitarist Brian May on tracks from the album. Born This Way debuted in the top five spots of every major market, including the Billboard 200. In the United States, Born This Way sold 1.108 million copies in its first week – the largest first-week album sales in five years; an estimated 440,000 copies were sold on Amazon in two days of its first week at a price of 99 cents. Four of the album's singles – “Born This Way”, “Judas”, “The Edge of Glory”, and “Yoü and I” – went on to chart in the top ten of the Billboard Hot 100 and “Born This Way” became the 1000th song to reach the number one spot since the inauguration of the chart in 1958. User-contributed text is available under the Creative Commons By-SA License; additional terms may apply.