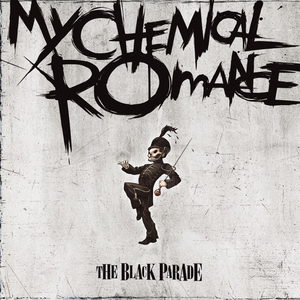 The Black Parade is the third studio album by My Chemical Romance. Released on October 24, 2006 through Reprise Records, it was produced by Rob Cavallo, known for having produced multiple albums for Goo Goo Dolls and Green Day. It is a rock opera centering on a dying character with cancer known as "The Patient". The album tells the story of his apparent death, experiences in the afterlife, and subsequent reflection on his life. Four singles were released from the album: "Welcome to the Black Parade", "Famous Last Words", "I Don't Love You", and "Teenagers". The Black Parade has received generally favorable reviews, and the band achieved its first Number 1 single in the UK with "Welcome to the Black Parade". The album debuted at number two on both the Billboard 200 and the UK Albums Chart and is also certified as platinum by the RIAA, as well as a Platinum certification in the UK and a Gold certificacion in Argentina by the CAPIF and in Chile by the IFPI Chile. The Black Parade was given the Platinum Europe Award by the International Federation of the Phonographic Industry for 1 million sales in Europe. The limited edition boxed set also earned My Chemical Romance a Grammy Award nomination. In the video game Guitar Hero II (Xbox 360 version), the song "Dead!" was added to the game's track list prior to the earlier PS2 version, and the three songs "Teenagers," "Famous Last Words" and "This Is How I Disappear" are available for download. The Black Parade has sold 1,610,000 copies in the US as of October 2010, and has sold 3,000,000 copies worldwide. User-contributed text is available under the Creative Commons By-SA License; additional terms may apply.