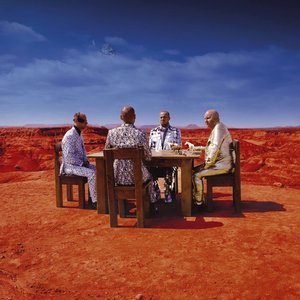 Black Holes and Revelations is the fourth studio album by English alternative rock band Muse, released on 3 July 2006. Recording was split between New York and France, and it was the first time Muse had taken a more active role in the album's production. The album was a change in style from Muse's previous albums, and the band cited influences that included Queen, Millionaire, Sly and the Family Stone, Depeche Mode, Franz Ferdinand and music from southern Italy. The album has political and sci-fi undertones, with the lyrics covering topics as varied as political corruption, alien invasion, New World Order conspiracies as well as more conventional love songs. The album sold 115,144 copies in its first week in the UK, which was more than the first week sales of Muse's previous album, Absolution. The album is also a BPI double platinum album, and was nominated for a Mercury Prize. Five singles were released in the UK, of which three were released in the US. A world tour followed the release of the album that included dates in the UK, the USA, Canada, Australia and most of Europe and Asia. User-contributed text is available under the Creative Commons By-SA License; additional terms may apply.