Album: Together Through Life 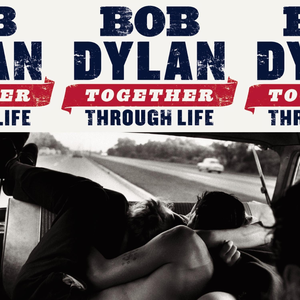 Together Through Life is the 33rd studio album by Bob Dylan, released on April 28, 2009, on Columbia Records. The album debuted at number one in several countries, including the U.S.[1] and the UK. It is Dylan's first number one in Britain since New Morning in 1970.[2][3] Dylan wrote all but one of the album's songs with Grateful Dead lyricist Robert Hunter with whom he had previously co-written two songs on his 1988 album Down in the Groove. In a recent interview with Rolling Stone magazine, Dylan said “Hunter is an old buddy, we could probably write a hundred songs together if we thought it was important or the right reasons were there...He's got a way with words and I do too. We both write a different type of song than what passes today for songwriting.” The only other writer Dylan has ever collaborated with to such a degree is Jacques Levy, with whom he wrote most of the songs on Desire (1976). Rumors of the album, reported in Rolling Stone magazine, came as a surprise, with no official press release until March 16, 2009 — less than two months before the album's release date.[4] Dylan produced the record under his pseudonym of Jack Frost, which he used for his previous two studio albums, "Love and Theft" and Modern Times. The album was rumored to contain "struggling love songs" and have little similarity to Modern Times.[4] In a conversation with music journalist Bill Flanagan, published on Bob Dylan's official website, Flanagan suggested a similarity of the new record to the sound of Chess Records and Sun Records, which Dylan acknowledged as an effect of "the way the instruments were played." He said that the genesis of the record was when French film director Olivier Dahan asked him to supply a song for his new road movie, My Own Love Song, which became "Life is Hard" and "then the record sort of took its own direction." [5] Dylan is backed on the album by his regular touring band, plus David Hidalgo of Los Lobos and Mike Campbell of Tom Petty and the Heartbreakers.[5] Dylan commented on Campbell's guitar work in his interview with Flanagan: “He’s good with me. He’s been playing with Tom for so long that he hears everything from a songwriter’s point of view and he can play most any style.” [6] "Beyond Here Lies Nothin'" was available as a free download for one day on Monday, March 30, via Dylan's official site. "I Feel a Change Comin' On" was released for streaming on Monday, April 6 on The Times Online website, as well as the third installment of his interview with Bill Flanagan.[7] In the interview with Bill Flanagan, Dylan discusses the only known outtake to "Together Through Life", "Chicago After Dark". Apparently, this song was in the running to be on the album but was left off the final version, as Flanagan talks about the song as if it is on the album. The song is not circulating. The album received two Grammy Award nominations in "Best Americana Album" category and "Best Solo Rock Vocal Performance" category for "Beyond Here Lies Nothin'". The album also is significant as the only album by Dylan to top the US and UK charts consecutively. User-contributed text is available under the Creative Commons By-SA License; additional terms may apply.