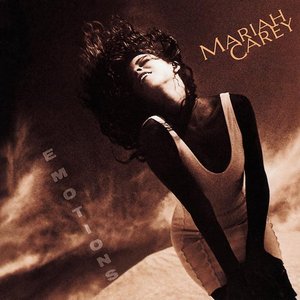 Emotions is the second studio album by American singer Mariah Carey, released in the United States on September 17, 1991 by Columbia Records. It is primarily composed of strong ballads and dance music - written by Carey herself, Walter Afanasieff, ClivillĂŠs & Cole (of C+C Music Factory), and Carole King. The title track became Carey's fifth consecutive number 1 song on the Billboard Hot 100, making her the first artist to achieve this feat. The album also generated the top 5 singles Can't Let Go and Make It Happen. Contrary to her debut album, Carey wrote and co-produced and musically composed the entire album, providing lyrics for all ten tracks. She was nominated for two Grammy Awards for Producer of the Year and Best Female Pop Vocal Performance. Emotions was eventually certified 4x platinum by the RIAA. Emotions debuted and peaked at number 4 on the U.S. Billboard 200 with first-week sales of 129,000 copies, which surprised some following the huge success of Mariah Carey. It spent twenty-seven weeks in the top twenty and a total of fifty-five on the Billboard 200. It became the first of four Carey studio albums not top the Billboard 200 and was her lowest-peaking album until Glitter (2001), but it was certified 4x platinum by the RIAA in 1994. Emotions performed better on the chart than her debut in the UK, peaking within the top five and spending four weeks more in the top seventy-five, with a total of forty weeks. The album was a success in Canada and Australia, but as in the U.S. it did not sell as well as Mariah Carey. The album made the Canadian top five and the Australian top ten, and was certified 4x platinum in Canada and 2x platinum in Australia. Carey's success was once again moderate across continental Europe. User-contributed text is available under the Creative Commons By-SA License; additional terms may apply.